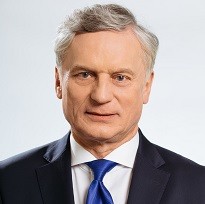 Mr. Ryszard Wasiłek has held the position in the Management Board of PGE since March 2016 – first as the Vice-President fo Development, and since February 2017 as Vice-President for Operations. Earlier, he had been the President of the Management Board of a district heating company Przedsiębiorstwo Energetyki Cieplnej Sp. z o.o. in Stargard (2003-2016). In years 1994-2003 worked at KielArt Sp. z o.o. in Szczecin as CEO – Chairman and in years 1990-1994 Mr. Ryszard Wasiłek served as the Deputy President of Stargard, responsible for economic policy.