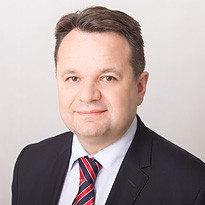 Mr. Paweł Śliwa graduated from Law and Administration Faculty at the Maria Curie-Skłodowska University in Lublin, branch in Rzeszów. He completed PhD studies on the Cardinal Stefan Wyszyński University in Warsaw and postgraduate studies EMBA at the Institute of Economics of the Polish Academy of Sciences. Completed attorney apprenticeship in Regional Bar Council in Rzeszów.

Mr. Paweł Śliwa has held the position of the Vice-President of the Management Board of PGE since March 2016. From March 1, 2016 till March 22, 2016 he held a position of the Supervisory Board member of PGE. From 2002 till March 2016 Mr. Paweł Śliwa ran a Law Firm in Gorlice. Since October 2010 a councilor in the legislative assembly of Małopolskie voivodship. In years 2005-2012 ran a Solicitor’s Partnership in Gorlice. In years 2006-2007 he held the position of the Vice-Chairman of the Supervisory Board of Ruch S.A.